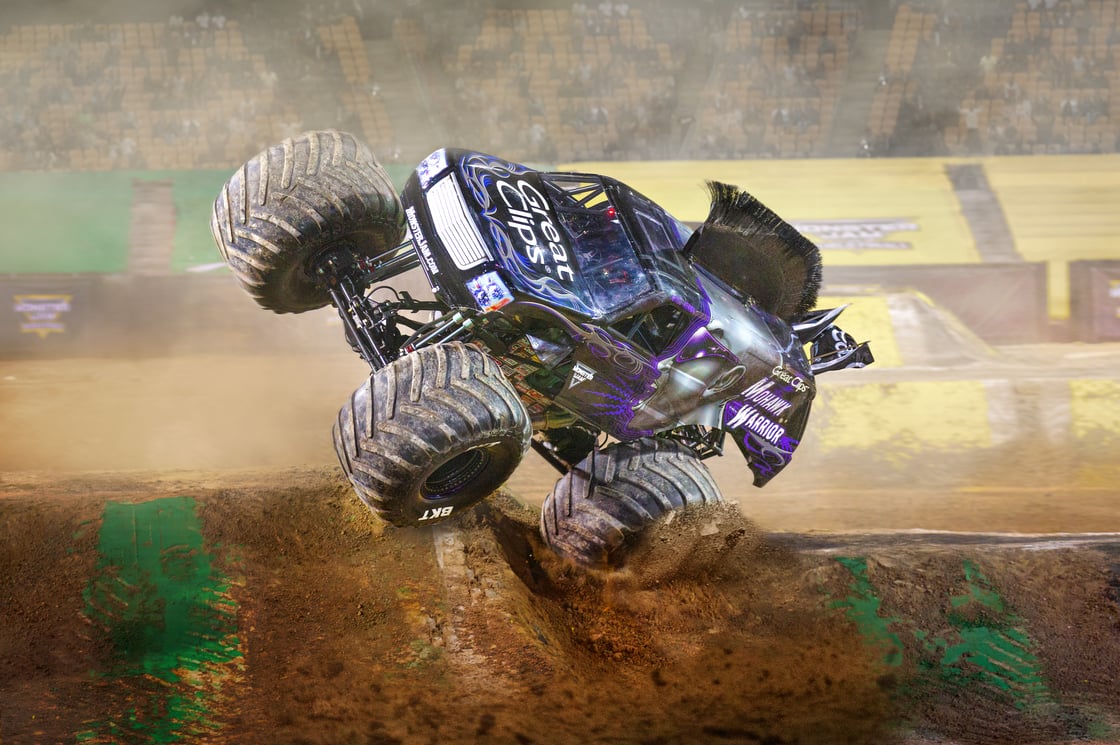 Standing ten and a half feet high, twelve and a half feet wide, weighing in at roughly 12,000 pounds, and rolling on tires that are 66 inches tall, the trucks of the Monster Jam series are wholly unique pieces of machinery in the realm of motorsport. Motivation is provided by blown and alcohol-fed 540ci big block Chevy-based Merlin V8s that churn out roughly 1,500 horsepower, and if you’ve ever seen a monster truck event, you know that these mills are put through the ringer at every competition.

“In something like drag racing, you’re basically on the throttle or you’re off of it during the span of a few seconds,” says Bryce Kenny, driver of the Great Clips Mohawk Warrior Monster Jam truck. “But in a freestyle event, I couldn’t tell you how many times my foot goes on and off the throttle during that 120-second run. Probably at least two hundred times.”

Considering that, along with the fact that these trucks are regularly launched in the air, flipped, wheelied, and propped on their noses for significant amounts of time, the engines used in these beasts have specialized fuelling demands. For years, teams in the Monster Jam series have relied on mechanical fuel injection to do the job, but even with decades of development behind the system, the results were never really ideal.

“The power was basically like flipping a light switch – it was either on or it was off,” Kenny explains. “We could be at half-throttle, but because of the gearing in the trucks and the way these 1500hp methanol motors behave, the end result was basically just on or off.” 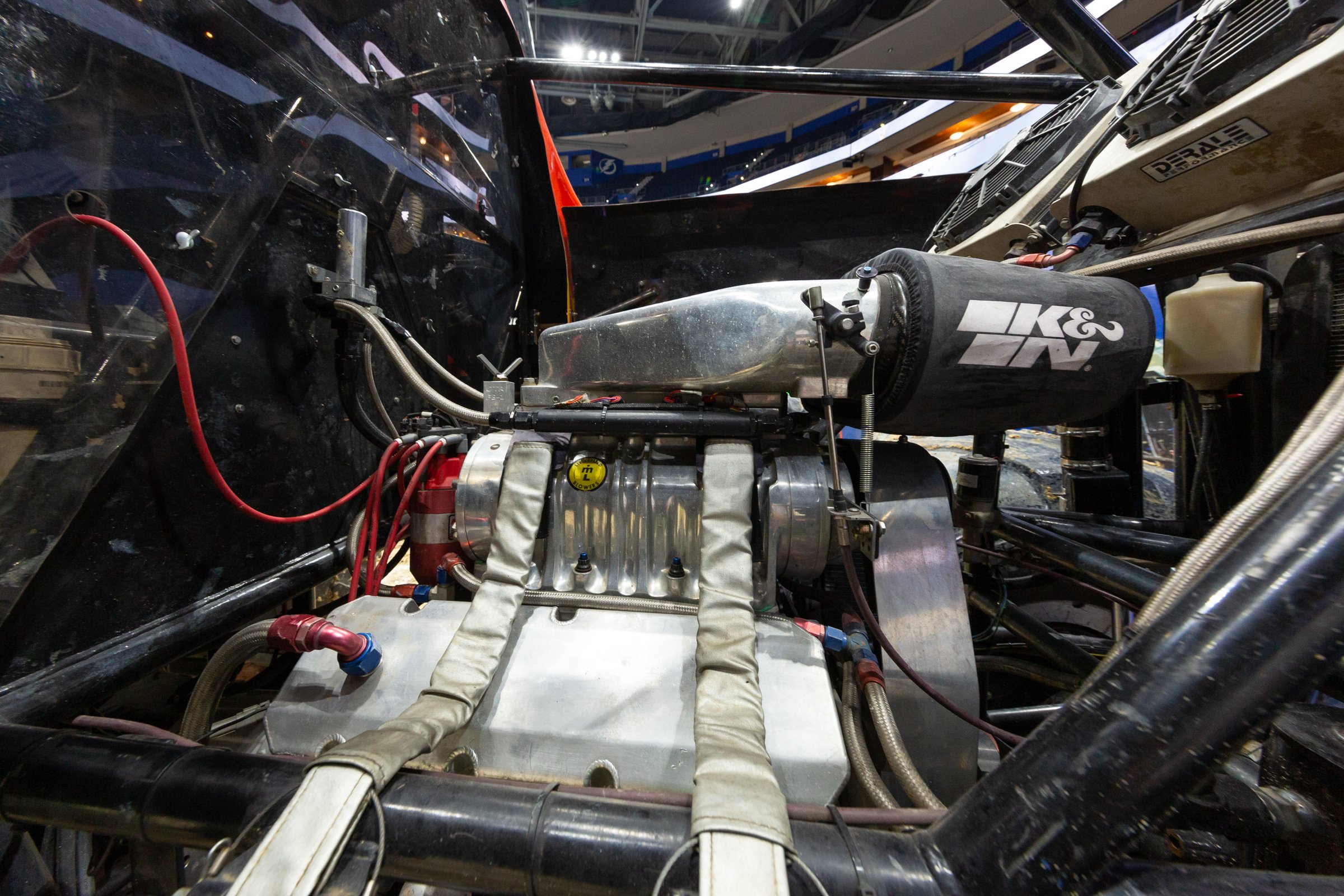 The fuel rail is mounted above the blower allowing the EFI system to help cool the blower's rotors.

In decades past, that’s about the best you could hope for given the complicated fuelling demands of the application, but times have changed. “With the mechanical injection system, we were using technology that basically dates back to the ‘70s,” says Richard Midgette, the engine program manager at Feld Entertainment, Monster Jam’s parent company. “That system was chosen because it could reliably flow enough to make the power that we needed. It was the correct system for the day, back in the ‘80s and ‘90s, but the technology available has changed substantially since then.”

And as the Monster Jam series itself has evolved over the years, drivers have been on the hunt for new ways to improve their programs. “You want to be sure that you have the systems in place that can grow as the demands of the sport grow,” Kenny tells us. “The Monster Jam fans of today want to see more than carnage – they want to see something that they’ve never seen before. And if we’re going to provide them with that, we’re probably going to ask these trucks to do things that they’ve never been asked to do before.”

Looking for a solution that could enhance both the drivability of the trucks and the efficiency of the engines, Midgette turned to Holley Performance for an EFI system that could bring these powerplants into the modern era. “We felt like there were ways we could improve on what we had, and Holley has been directly involved in the development since day one, helping us steer things in the right direction as we refined the Dominator system for this kind of use – without their help it would have been much more difficult to make that transition.” 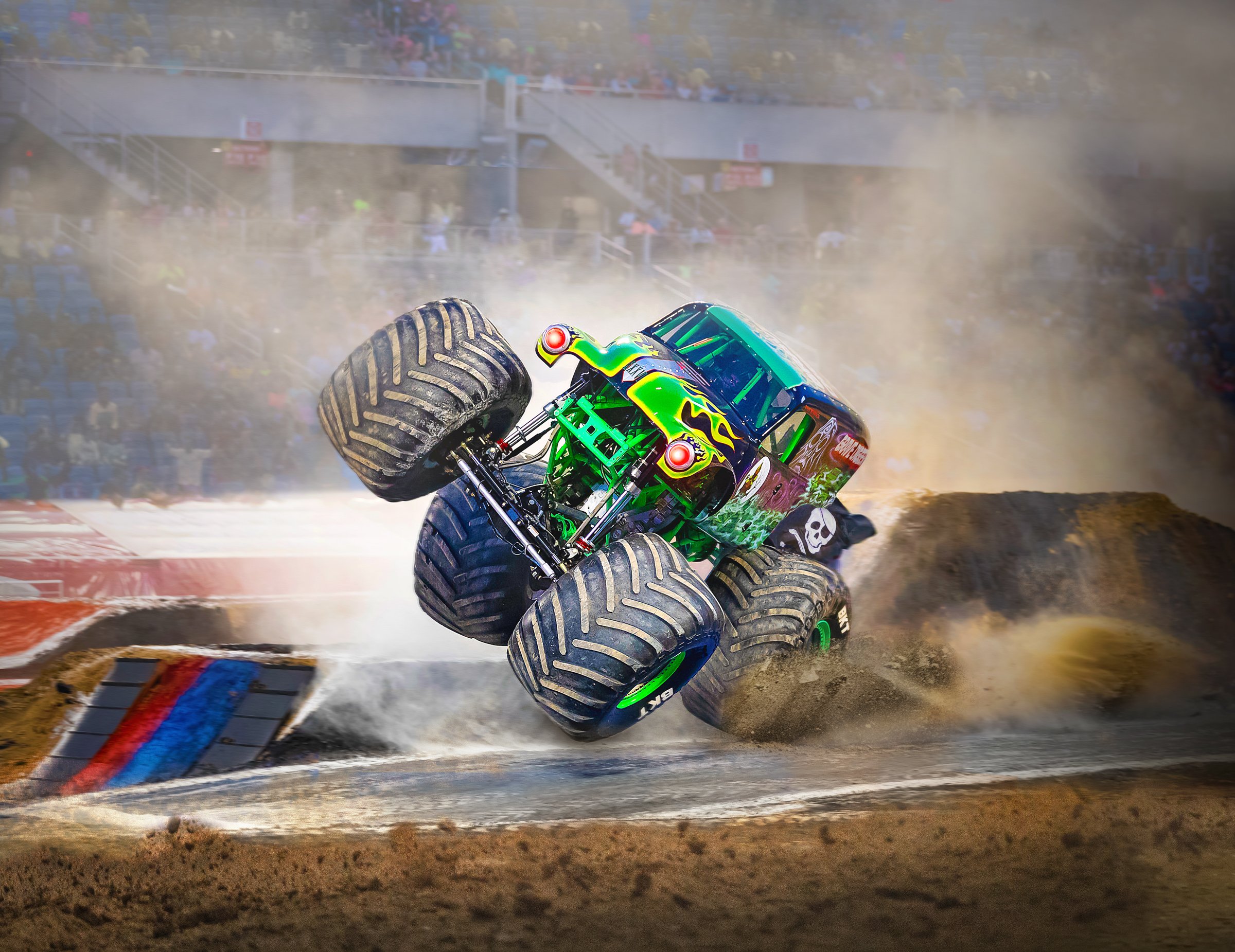 Kenny notes that Holley EFI has allowed him to “control the chaos” more so than ever before. “As drivers, it enabled us to have a bit of nuance. I think there’s still plenty of opportunity to evolve it further and figured out what that control can provide in these arenas and stadiums. That added control was the biggest improvement from a driving standpoint, but it was more than that. We also want to be able to play in any venue in across the United States – that’s our goal.” 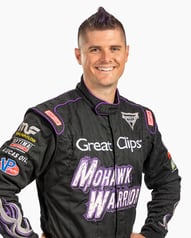 Kenny Bryce, driver of the Great Clips Mohawk Warrior Monster Jam truck, holds the title for fastest monster truck on the planet with his insane 100mph run in his Holley EFI equipped ride.

And to that end, the Holley EFI system has yielded a massive improvement in engine efficiency. “The fuel savings are massive,” Midgette notes. “Without making any changes to the engine other than what was needed to accommodate the EFI system, on the dyno we noticed that fuel consumption was reduced by more than a third. And when you have multiple monster trucks running on a given weekend, that’s a huge difference.”

Though Midgette says they’re currently using a fraction of what the Holley Dominator EFI system is capable of, he points out that moving to EFI has also completely changed the approach to tuning. “With computer control and data logging features, if the crew guys have a major issue they don’t have to call and try to explain what’s happening, send me pictures of spark plugs, or a video of how the truck’s running. They can just send me a data log. Making the switch has cut down on those phone calls tremendously.”

And those capabilities have also allowed drivers like Kenny to take their trucks’ performance to parts unknown. “We set out to become the first monster truck in the world to go 100 miles per hour, and that’s a tall order in something that’s built for jumps and has tires that weigh 800 pounds each. I wanted to be the first guy to go 100 mph, but I didn’t want to be the first guy to crash at 100 mph.”

To get the Mohawk Warrior truck ready for the record-setting drag run last summer, Kenny says the team spent a lot of time making sure every component in the chassis was as true and straight as possible to minimize vibration, an issue which often becomes a bigger and bigger concern in monster trucks as speeds increase. But he notes that the truck could have done a Monster Jam event as it was equipped for the record-setting run at Bradenton Motorsports Park, and that the Holley EFI system ultimately played a critical role in their success.

“When we went back to look at the data logs after the first runs, what we noticed was that we were waiting too long to go full throttle. With the Holley system we have that throttle position sensor, so we could see exactly when I’m going full throttle and what the motor is doing at that time. We were waiting to get into the throttle a little further down the track because we were worried about running out of gear on the top end, but by doing that, it was never allowing the engine to build enough boost.” 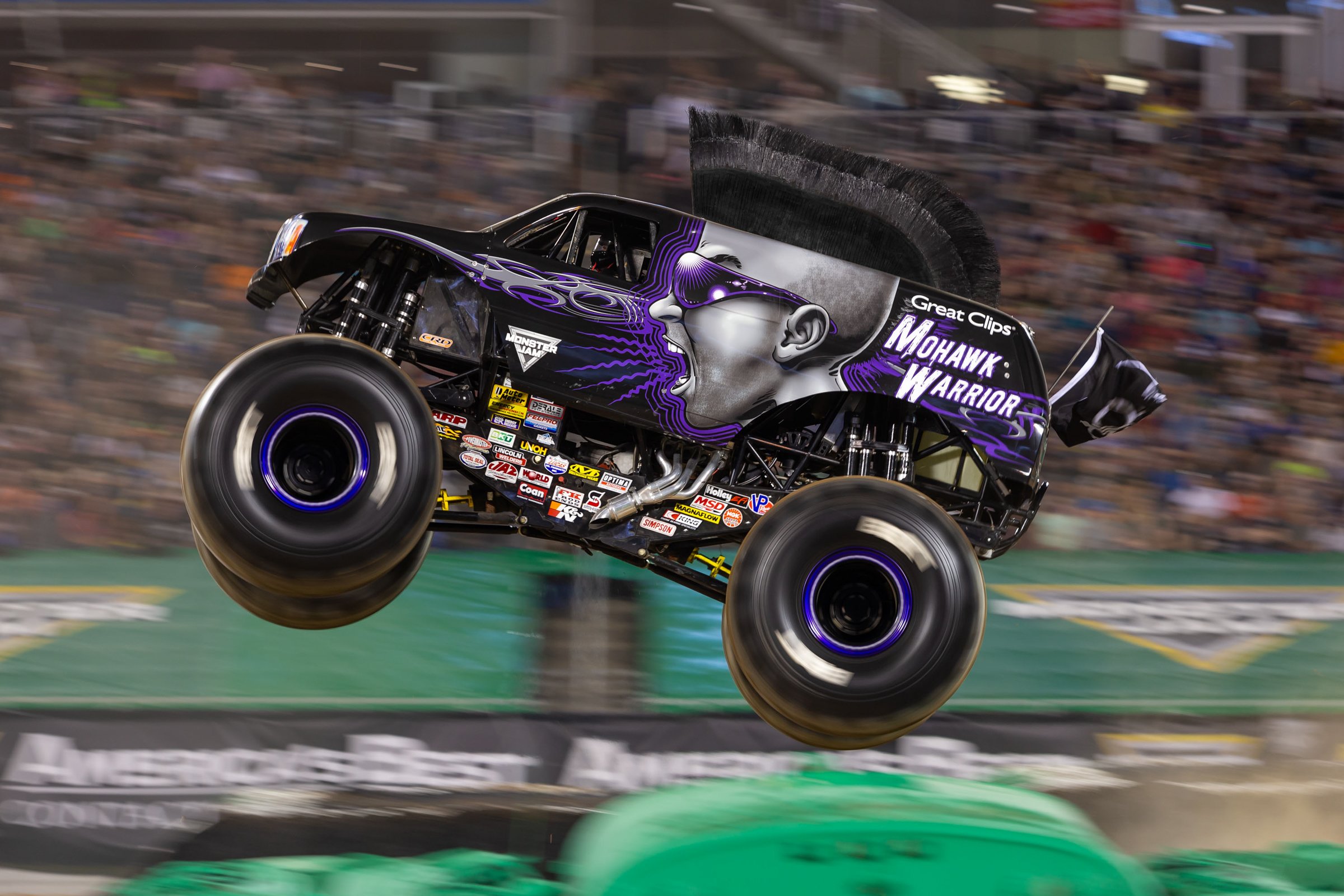 Kenny and Midgette spent some time looking over the data logs for RPM, boost, fuel, and throttle position. They came to the conclusion that Kenny needed to be much more aggressive in first gear in order to build the boost required to prevent the engine from laying back down after the upshift to second gear, and on the record-breaking run, data logs show that Kenny was at 100% throttle less than a second after leaving the line. “Thanks to Holley, we were able to use that data to make a game plan to be the first monster truck to ever hit 100 miles per hour, and the record now stands at 100.3 mph.”

Now into its third season of use in the Monster Jam series, the Midgette says that they have the Holley Dominator EFI dialled in, but continue to make tweaks to the tunes of individual trucks based on driver preferences. “The systems are holding up to the abuse – we’ve had zero problems with the EFI components. And when you’re talking about parts on a monster truck, that’s saying a lot.” 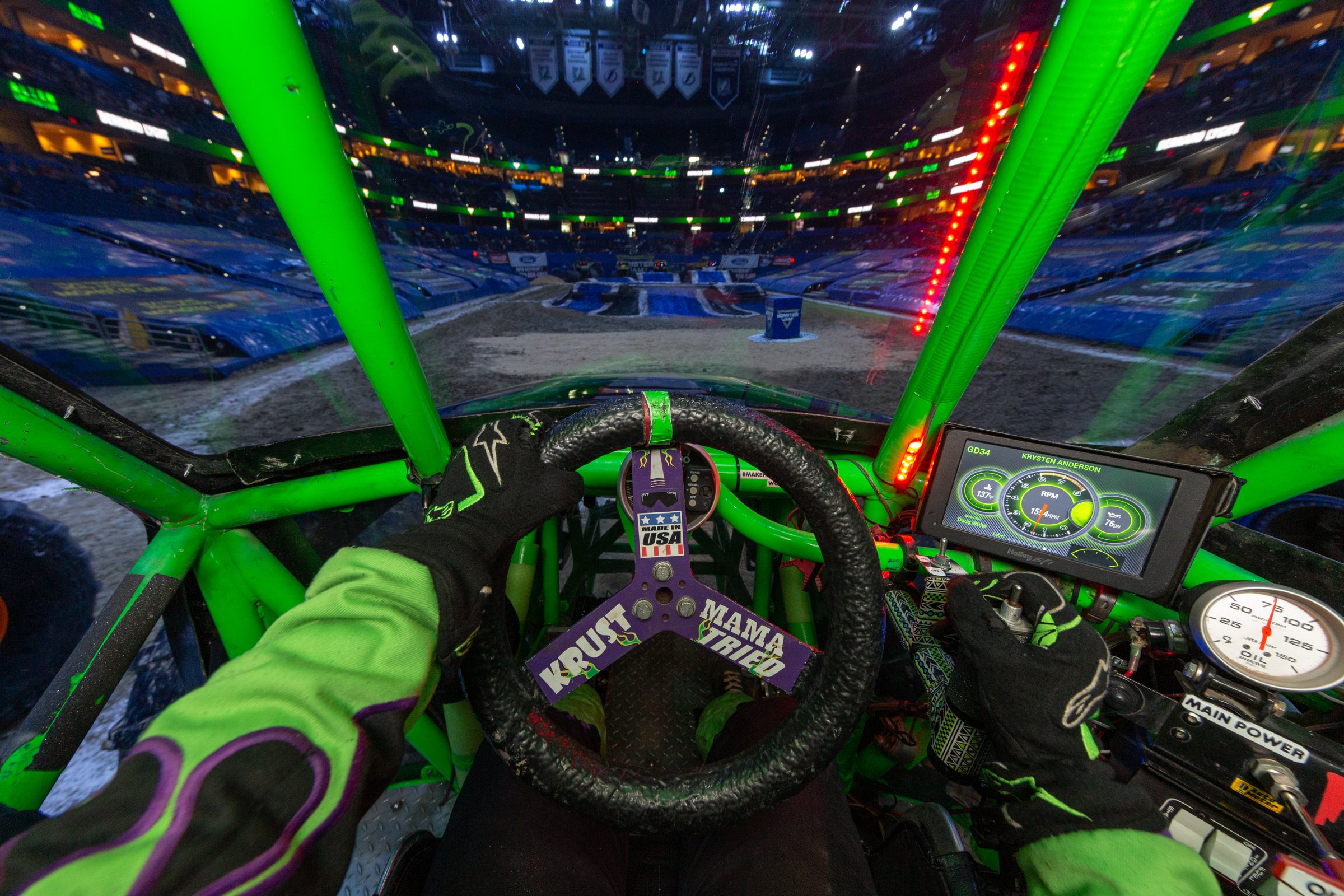